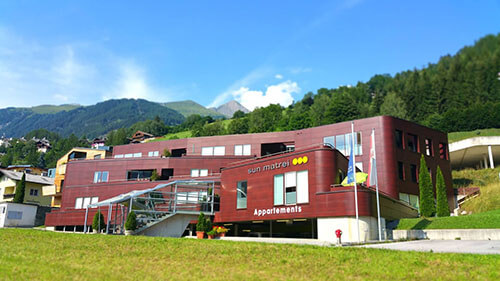 Matrei in Osttirol (until the 20th century: Windisch-Matrei) is a market town with 4806 inhabitants (as at 1st January 2010) in the district of Lienz (Austria) and spans 277.8 km² – the second largest district in Tirol. The area spans the entire Tauerntal and parts of upper Iseltal. The market town of Matrei itself is some 29 km to the north of Lienz, on the junction where the Tauernbach meets the Isel and is the economic, social, tourist and medical hub for the northern part of the district of Lienz. In terms of commerce, it is tourism which predominates. Here, in contrast to other significant areas in East Tyrol, winter tourism has been able to establish itself. Moreover, small to medium-sized businesses and agriculture do well here. Thanks to its location in the Hohe Tauern, the district of Matrei features a large number of mountains. The highest elevations are to be found in the Matrei section of the Venediger group. The highest being the Großvenediger (3674m), followed in by the chain of mountains in the east, with the Rainerhorn (3559m), the Schwarze Wand (3506m), the Hoher Zaun (3451m) and the Kristallwand (3310m), along with the Weißspitze (3000 m) and the Hohe Eichham (3371m) to the south. The Venediger group is in part heavily glaciated in the Matrei area. At the head of the Gschlößtal valley is the biggest glacier in the Venediger group, the Schlatenkees. Tourism has been a significant financial factor in Matrei, in particular from the time after the Second World War. In contrast to many other parts of East Tyrol, the area boasted a significant proportion of overnight stays in the winter from the start of the 1980s thanks to the connected ski area. In 1998 investment was also made in providing a new mono-cable ski lift. However summer tourism remains the most important mainstay and with the setting up of the Hohe Tauern National Park a gentle 'steering' evolved. As well as hiking (over 150 three-thousand metre mountains), Matrei is also popular with fly-fishers (Isel, Tauernbach), ice-climbers (Tauern and Iseltal) and cyclists (Iseltal cycle path). Matrei also has an outdoor swimming pool, a horse-riding hall and indoor tennis courts, mini-golf facilities and a regional climbing centre with a climbing hall. Currently there are around 260,000 to 300,000 overnight stays each year. The most important traffic network in the Matrei area is the Felbertauernstraße (B 108), which connects Matrei to the north via the Felbertauerntunnel (toll road) with Mittersill (Salzburg) and in the south-east, with Lienz. On average, some 3500 vehicles use the Felbertauern tunnel every day of the year to get to the town. The Felbertauernstraße is the most important connecting road to the neighbouring valleys too - linking Matrei to Virgental-Landesstraße (L 24), Defereggentalstraße (L 25) and Kalser Straße.